If you’ve read something about subsurface oceans in our solar system, the chances are you’ve already heard about the upcoming JUICE mission by ESA, scheduled to be launched in 2022 and tasked with investigating three of the Galilean moons of Jupiter: Europa, Callisto, and most of all Ganymede. Last week, a DLR scientist Dr. Hauke Hussmann visited Prague and had a lecture on JUICE, Ganymede and the GALA instrument developed by his team. Spoiler alert: It was great. 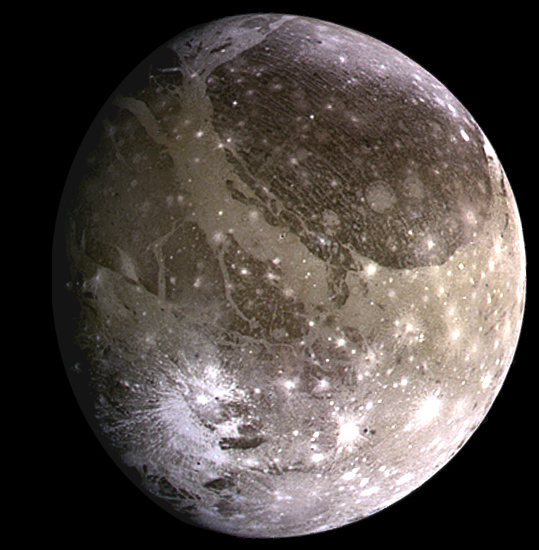 With its scientific equipment, JUICE should be able to tell us more about the composition of the investigated moons – we for example still don’t know the thickness of their icy shells or whether Callisto is in a hydrostatic equilibrium. JUICE’s radar is capable of hi-res measurements up to 9km thickness and low-res up to 30 km under surface (and the two instruments cannot operate together, so the scientists will choose which one to use during which flyby when the time comes). In case of Ganymede and Callisto, it probably won’t span the full thickness of the layer but it should tell us a lot about its properties. In case of Europa, it could in some areas reach to the boundary of the icy crust and the ocean beneath. Due to the need for more extensive radiation shielding, the time available for the mission and its objectives, JUICE will only make two low-altitude flybys of Europa in early 2031, and these will be above different areas. If you hoped for long-term close observations of Europa, you may be a bit disappointed – but don’t be, these data should still be awesome. We should finally learn much more about Europa’s icy shell thickness and structure. Besides that, the flybys should also give us more constraints on the salinity of the ocean (now mainly derived from the strength of the induced magnetic field – but the range is large as we don’t know how deep the shell and the ocean are) and the degree of geological activity.

Callisto’s structure remains somewhat mysterious, and JUICE is going to study its structure and differentiation during the 13 planned flybys. When the induced magnetic fields of the three icy Galilean moons were previously measured, Callisto had produced the strongest signal. What are the properties of its ocean and how does it work in this not fully differentiated body? We shall know more in the 2030s thanks to JUICE.

Ganymede is the focus of the mission. JUICE is going to enter its orbit and gradually change it to move to a very close circular orbit, with an altitude of just 200 km. It will remain in Ganymede’s orbit til the end of the mission (after which the spacecraft is supposed to crash onto Ganymede’s surface – as its icy shell is very thick, it’s not deemed as a danger of contamination). We’re going to get great gravitational and magnetic field measurements, optical and radar imaging and laser topography thanks to the probe’s focus on Ganymede. Dr. Hussmann is a member of the team working on the GALA instrument – laser altimeter (sends a laser pulse to the surface and measures the time before the reflected pulse is detected and its properties). GALA should be capable of finding out the structure, albedo and roughness of the surface in great detail. It can also operate on the dayside, albeit with a higher noise ratio.

The whole proposed scenario of the mission is listed on ESA’s JUICE site.

In short, we’ve got a lot to be looking for! Let’s hope everything works out just fine and we receive lots of great data after 2030. They even may suggest some landing sites for future missions.

The Department of Geophysics of Charles University in Prague, where the lecture was held, has produced some very interesting research on icy moons as well, especially models of Saturn’s Enceladus. I think I’ll follow their work more closely!

And last Friday, I encountered an interesting new paper about newly discovered subsurface water systems in Antarctica’s Taylor Valley (Mikucki et al. 2015). I really liked the method of discovery: an electromagnetic sensor system. We’ve got Jupiter for studying induced magnetic fields in its moons; here on Earth, we generate electromagnetic fields locally to find out the properties of the studied area. These reservoirs likely have a marine origin, as the area used to be a fjord ecosystem back in the Miocene. Luckily, the article is open-access, so anyone can read it.

Exploring the life in there could provide more useful insights into the possibilities of life in lakes inside the icy crusts of moons and dwarf planets in our solar systems and also give us deeper understanding of the possibility of such conditions on Mars where deposits of water ice exist below the surface in some areas. Could there be liquid water in the form of brines somewhere too? If they formed in a similar way Mikucki et al. (2015) propose for the brines in Taylor Valley, could they have persisted over such a long time from when there was last liquid water on the surface of Mars? Would the bedrock be comparable to these systems on Earth?

Questions, unceasing questions… What adventure it will be to try to find the answers.