Having arrived to London five days before Worldcon, I got to explore what the city can offer and found several interesting places to visit not only for a geek, but certainly very recommendable to one. The best highlight of those was the Ships, Clocks & Stars exhibition at the National Maritime Museum in Greenwich. Not only is the search for precise longitudal measurements an interesting topic itself, but the exhibiton is also brilliantly composed and can offer an insight into the atmosphere surrounding the quest for winning the Longitude Act prize and allowing ships navigate the world safely. Sitting by an animated table with the comissioners of the Board of Longitude and listening to their disputes about whom the prize should be awarded was just priceless and seeing Harrison’s timekeepers and their development highly interesting.

Another exhibition, loosely connected to this one, is Longitude Punk’d, a steampunkey take on the longitude quest. This one is based at the Greenwich Observatory inside Flamsteed’s house. No fan of steampunk should skip this hillarious piece. This exhibiton is sort of two in one: you can look around Flamsteed’s house for serious and have fun over the fictional exhibits. Although, the one with the highest weirdness factor was a real submission for the Longitude Prize.

Science Museum is great to see too. I personally most liked the part focused on James Watt and the development of steam engines (yeah, steampunkers should visit here too) but the whole museum is fine. If you want to really explore it, take at least a day for it, better two (if you end sooner you can always try to visit the Natural History Museum but beware of queues – we’ve walked around two times and each time there was a truly horribly looking queue – not just for the special exhibitons but for the whole museum).

Ships, Clocks & Stars and the Watt exhibition have an important thing in common: They can remind us that the stuff we take for granted today and teach at primary schools was a part of painstakingly and slowly achieved progress. Could you spend several decades trying to assemble a precise enough clock that would run correctly on a ship? Would you choose a life in a tiny workshop, making and repairing scientific instruments day after day while running experiments in several science fields and trying to bring something new to mankind? (And now I’m probably inadvertently making it sound very pompous.) The thing is: we don’t see the endless days and nights spent with drawings and calculations and loose ends, year after year. We only see the results – and today, they might not at first sight seem so impressive since we’ve got computers and smartphones for everything and everyone can find their longitude or steam engine plans on their phone. And if you see the exhibitions, you can only stand in awe of how much skill, curiosity, intelligence, hard work and determination was needed to achieve scientific and engineering progress – and yet there was little heroic in it, though we might want to picture it that way. Sustained hard work – that might be the most accurate way of looking at it.

I’ve mentioned the easy information access allowed us by using computers. The museum also has a great part focused on the history of computing. (And among other things, you can see a half of Babbage’s brain there. Just saying. Braaains…)

Camden Town and its famous market are other locations for a fan to visit. Whether you’re a geek, goth, punk, otaku, steampunker or anything else, you might want to take a look over this place. And be sure to visit the food market. The stands offer meals from all over the world. The mixture of smells and sights is wonderful.

And if you wondered what it looks like in Camden… 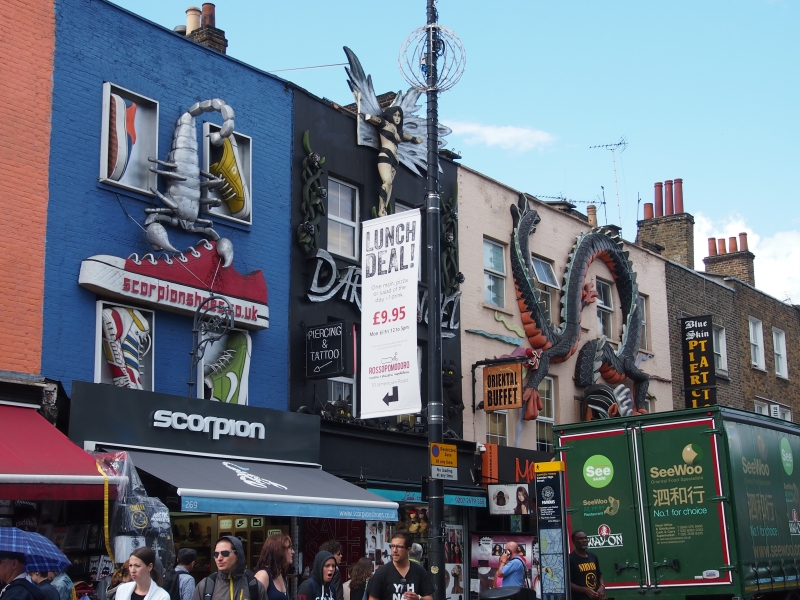