This year’s European Planetary Science Congress is over. It’s been exciting, full of news and interesting people and really well-organized. What were some of the highlights from Thursday and Friday?

The Ceres section has been wonderful. C. T. Russel first summarized the Dawn mission, its current status and future prospects, and the first results from the Survey orbit. The possibility of a locally or temporarily magnetized surface (assumed as one possible explanation for the spikes in recorded spectra) is certainly worth a thought and further investigation, although Dawn itself doesn’t have a magnetometer, so it would have to be tested indirectly or by another craft. Maria Cristina De Sanctis presented the results of VIR observations and ammonia seems to be the best fit for the surface composition. As ammonia otherwise seems quite rare in the inner solar system and its frostline should lie around Neptune’s orbit, it could suggest that Ceres either formed in its present orbit from smaller bodies having drifted there from the Kuiper Belt, or that it’s originally a Kuiper Belt object too (see McKinnon 2008 for this hypothesis). And if ammonia proves more abundant in these regions (for example if more KBOs drifted there early in the solar system’s evolution), could it have some implications for brines on Mars?

Ralf Jaumann from DLR proposed brine upwelling as a possible explanation for the geologic features seen on Ceres, especially flows, mountains and possible salt domes. He also analyzed spectra of reddish and bluish regions and tentatively came up with perchlorates as a good fit for them. Perchlorates and ammonia…? That’s a highly combustible combination. As Tomas reminded me, spectra of salts tend to be complicated to distinguish, so it could well be a different compound. The results are still preliminary and a more detailed analysis will tell us more. In any way, the brine upwelling hypothesis is certainly very interesting. Tomas Petrasek has written a detailed article about Ceres (in Czech), which should be published very soon. I’ll be sure to tweet it when it’s out. By the way, the shown topographic and color/albedo maps of Ceres seemed to me to show similar patterns. We’ll see later if it really is so and what it might mean in that case.

Klára Kalousová presented her model of shallow subsurface water under Europa’s strike-slip faults. Its implications for astrobiology and crustal processes are large and I’ll be certain to follow her subsequent work closely; she’ll be adding more variables into the model, including varying the ice’s composition, and working on other complex models with the people from Nantes University. The following talks about JUICE and Europa Mission, respectively, nicely summarized the missions’ planned equipment, trajectories, time scales and objectives.

Petr Brož presented evidence for features of possible volcanic origin on Mars, dating back just into the mid to late Amazonian epoch. The cone clusters, often with associated flows, are morphologically similar to such volcanic features on Earth. Could Mars have been so active even is such relatively recent past? We’ll do a Mars-themed feature article with Tomas (in Czech, possibly English too), so stay tuned for more than just this brief mention. Mars has certainly been one of the hottest topics of this year’s EPSC.

The planetary habitability section was very interesting as well, covering a wide range of topics from dynamical perturbations of eccentric orbits, across C/O ratio’s influence on habitability, to conditions in high-pressure layers in ocean world. Especially the latter talk by Lena Noack has been amazing. It would be great to combine her approach with Baptiste Journaux’s models of convection in HP ice layers, and as it is, that is actually a real plan. Works by Noack, Journaux, Tobie, Choblet and others may tell us much more about the possible habitability boundaries for water-rich worlds, be they exoplanets or large icy moons within our own system. Certainly one of the greatest conference highlights! We’ll also cover this topic more extensively in upcoming articles.

The outer planets section on Friday was centered mostly on Titan, with some talks also about Enceladus. In short: Serpentinization highly likely on Enceladus, overall composition and conditions favorable for life as we know it. Will we see LIFE or ELF chosen as a mission to implement anytime soon? As for Titan, could a large cometary impact account for its present atmosphere? Melting at the bottom of the high-pressure ice layer seems likely. Is there a thick layer of ethane clathrates, also explaining the overall abundance of methane in Titan’s lakes? Those are just hints of what has been there today; we’ll cover it later.

Both I and Tomas would like to thank the Geophysics Department of the Charles University for enabling us to attend. It has been a wonderful event full of many interesting answers and even more questions to follow up on in the future. As for you, dear readers, you may look forward to a series of articles about topics discussed in the conference talks. Czech readers are likely to see them in Vesmir (both print magazine and website), Osel.cz website and elsewhere. English-speaking readers can be sure to find anything in English published or linked here. It’s going to be a busy time ahead of us. We hope that then you can enjoy the news from the conference as much as us.

P.S.: Tomas’s popular science article on rogue planets has been published in Clarkesworld!

P.P.S.: The outreach section of EPSC in the lobby of the congress centre was great as well, attracting a lot of attention from the visitors, schools etc. We couldn’t miss the VR simulation of Rosetta and Philae! 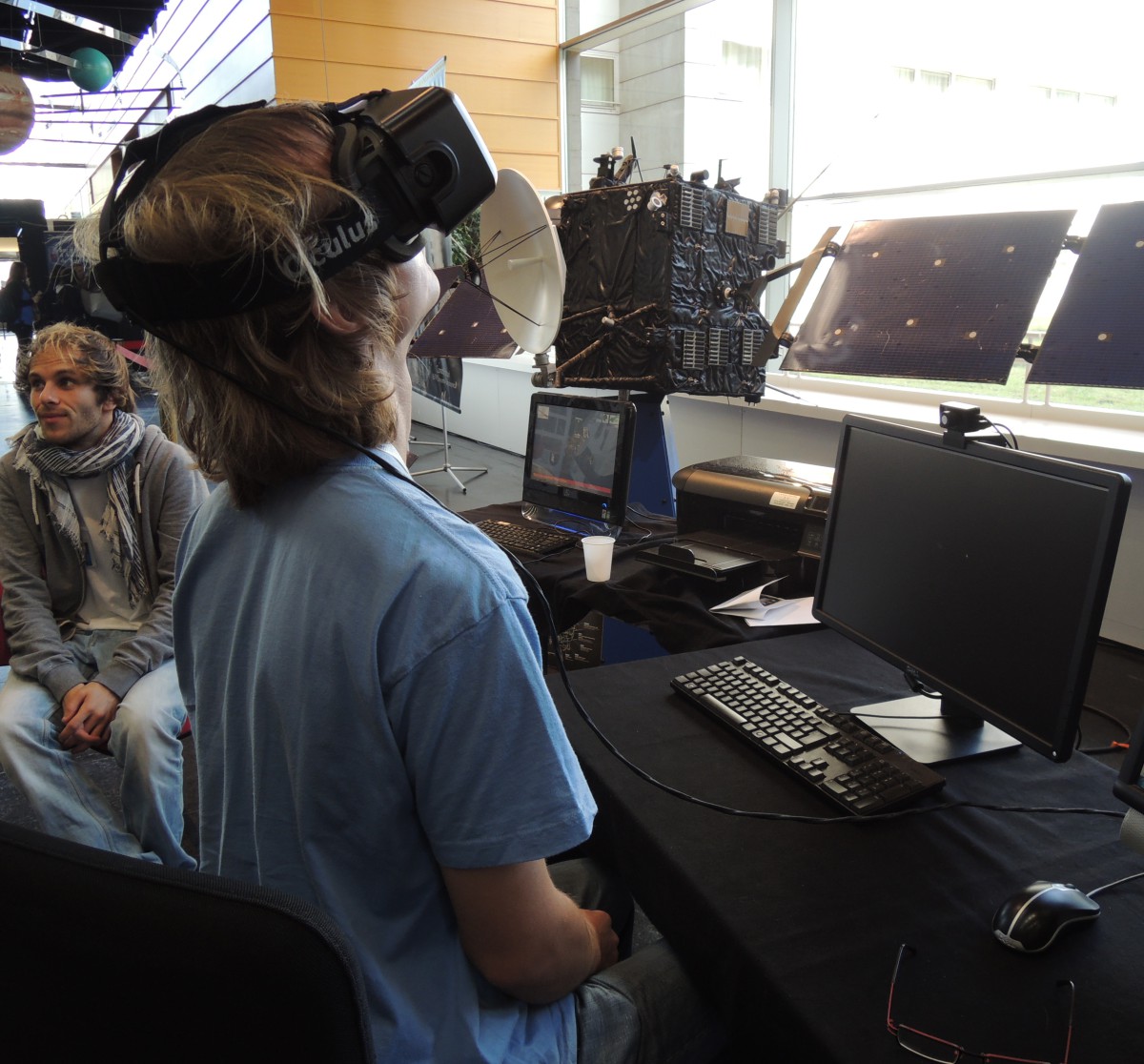 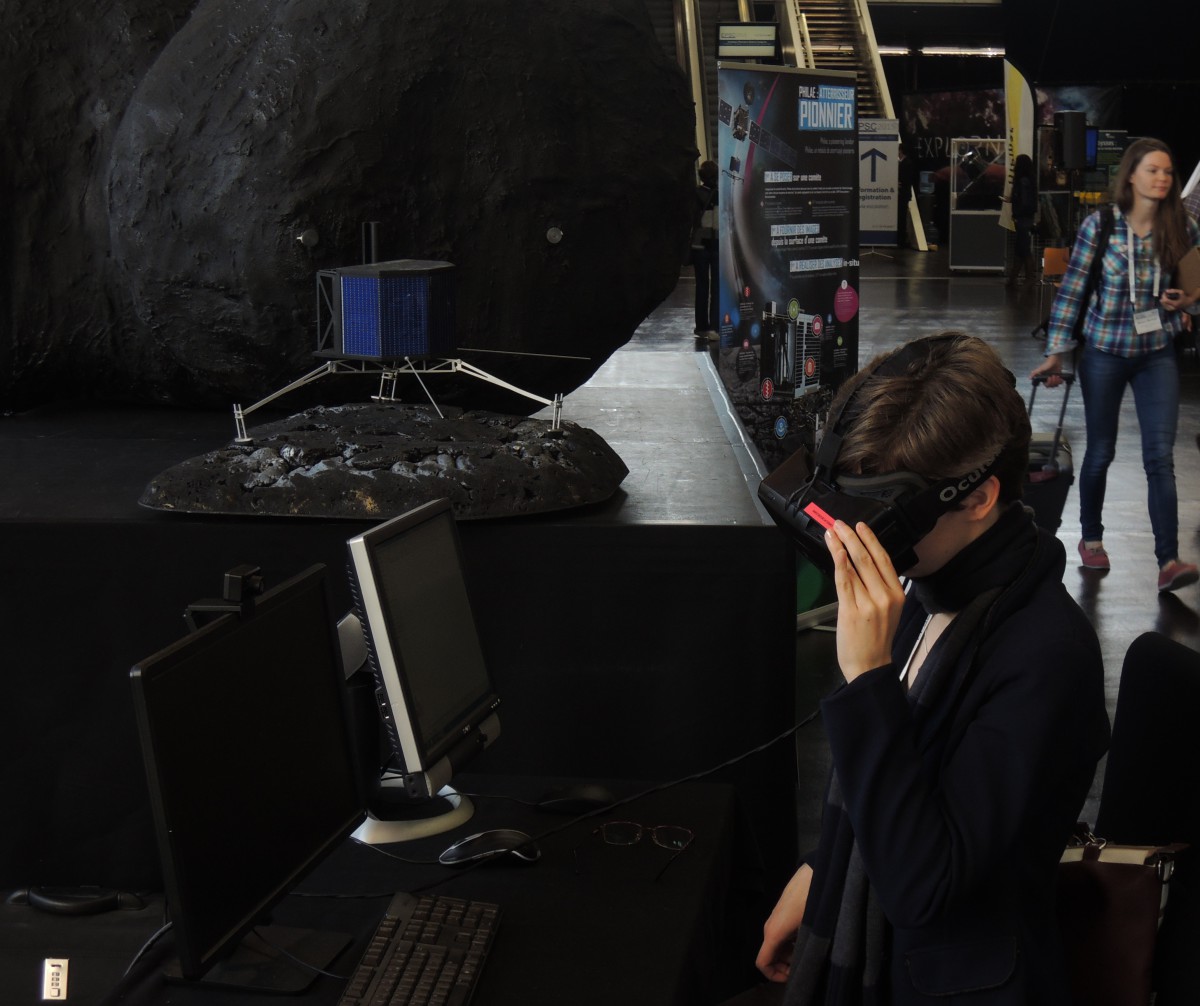