You couldn’t have missed the headlines: Due to Rosetta’s measurements of the ratio of hydrogen and deuterium in 67P/Churyumov-Gerasimenko’s water vapor, the hypothesis that Earth’s water had been brought here by comet impacts sometime around the Late Heavy Bombardment suffered a heavy hit, so to say. In short: Most comets have a much higher ratio of D/H (deuterium/hydrogen) than Earth. The only known exception is comet 103P/Hartley 2. Of course, we don’t know how representative the current sample may be of comets hitting Earth nearly four billion years ago, but it’s now supposed that Earth’s water had been more likely brought here by asteroid impacts (as most investigated asteroids have a D/H ratio similar to Earth), or possibly that most of our water has been here since Earth’s formation (only not always on the surface). According to seismic measurements, about twice as much water as is in our oceans, lakes, glaciers and atmosphere may be contained in high-pressure mantle rock. So far, it’s not very clear if this water gets to the surface due to tectonics or is stored there for billions of years. However, slow degassing of the mantle rock may have formed Earth’s oceans. We may not need to explain the abundance of water on Earth by impacts of other bodies after all. It’s still in the early stages of research, we shall see later how each of the hypotheses fares in the light of new results.

But summing this up is not why I’m writing this post – you can read so much more in any popular science article on the web. I have an idea, which may or may not be completely off – I’m not a geologist or a chemist, so I’d be glad if a more qualified person told me whether it’s really stupid, clever or somewhere in between. Suppose for a moment that comets had indeed brought most of our water on Earth. How do we get from an average comet’s D/H ratio to Earth’s?

That’s where mantle rock comes back into the game. Could it have been more depleted in water in earlier stages of Earth’s existence, only gradually enriched in it until reaching some equilibrium?

So. In this scenario, we have water with more deuterium in it than now and mantle rock gradually absorbing water from the surface reservoirs.

What intrigues me is this: Is there any reason why heavy water would be absorbed in the mantle disproportionately to water containing hydrogen atoms?

We don’t need to devise any kind of preferential intake into chemical reactions due to the little higher molecular height of water containing deuterium instead of hydrogen (I don’t even know of any inorganic chemistry process that would distinguish between izotopes well enough – some enzymes are capable of that, but let’s leave biochemistry aside here). When I discussed this little idea of mine yesterday, Professor Markoš offered an easy solution when he mentioned studies showing that normal water evaporates more easily than heavy water (suggested also by the very high D/H ratio on Venus). If we evaporate a significant portion of the oceans of “comet water” and the water still in its liquid form is being incorporated into the bedrock, we may get a disproportional amount of heavy water stored in the mantle compared to what’s left on the surface. The Earth cools, the water whose molecules haven’t dissolved and atoms reached the escape velocity, gradually rains back. The D/H ratio of surface water is now lower than at the beginning.

That’s it in a nutshell. Now, this scenario is far too simplified. We’d need to put some constraints on the intake of water into the mantle, rate of evaporating under the presumed temperature and atmosphere composition in the given time range, create a model, etc., and finally try to falsify the hypothesis by measuring D/H ratio in our mantle water. Which is, you know, kind of difficult to do…

What I’m interested in is: Is it at least remotely possible, or am I far off on this track? Geologists, chemists, astronomers – fire at will!

For those interested in D/H ratios in different parts of our solar system, this graph from Altwegg et al. 2014 shows it quite nicely: 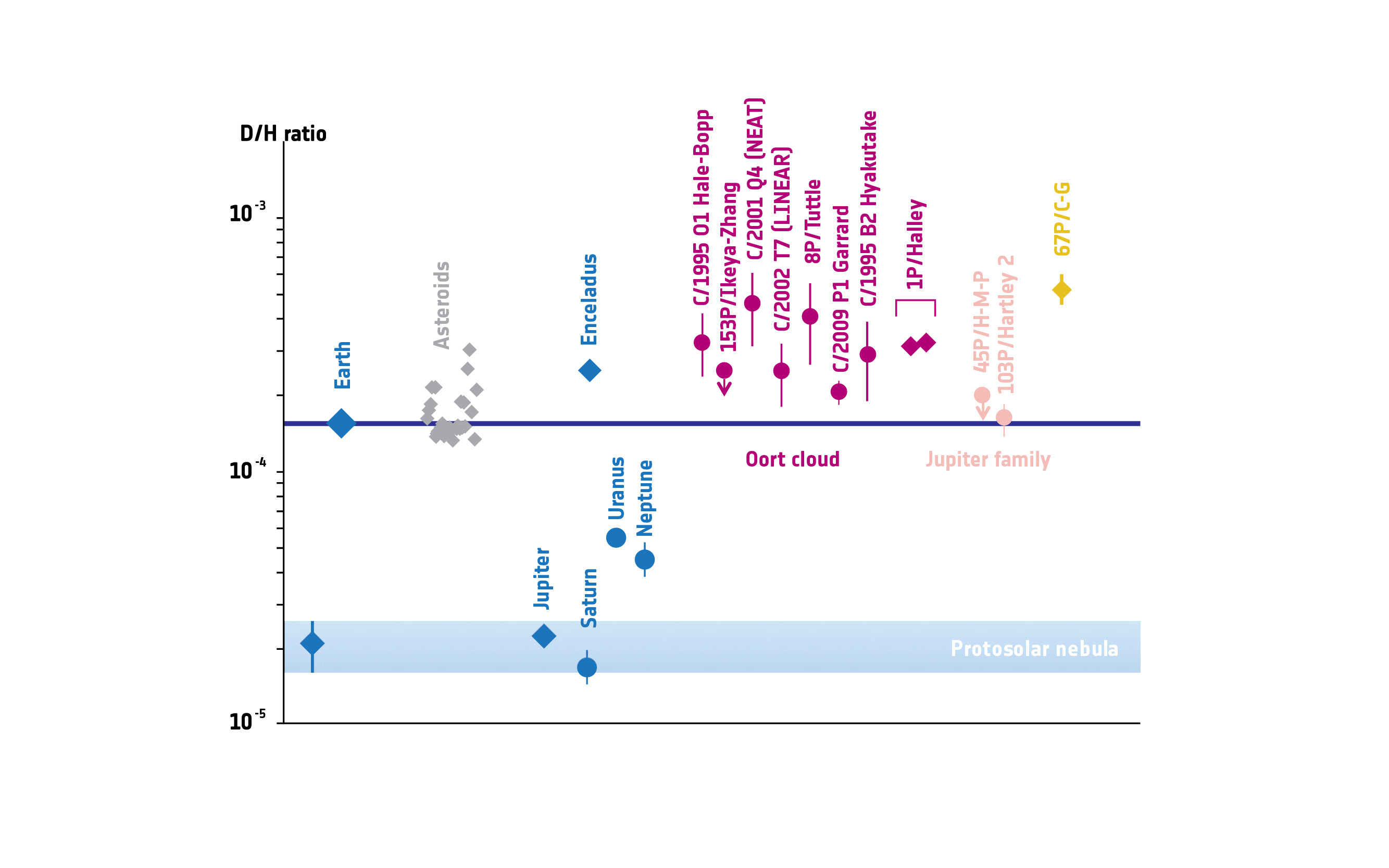