This is a question that has baffled me for some time. The first confirmed exoplanets were discovered around a pulsar, we know now of three – vastly different – pulsar planetary systems and some disks, there are several formation scenarios around, but isn’t it time we found out more about their possible composition to constrain the scenarios a bit and learn more about the range of exoplanetary conditions? Would it be too far-fetched even in the coming decades to e.g. try to see whether they have atmospheres, and if so, attempt to characterize them?

And since I couldn’t find any answer in scientific literature, I thought I’d try to calculate some basic estimates myself. After all, how hard can it be to come up with something beyond effective temperature – perhaps planet-star flux ratios to say whether future direct detections are possible and whether we might get some spectral lines, or to at least review the possibility of auroral observations? To give myself some motivation and deadline, I submitted an abstract to the EPSC this spring. Fast forward to now… and the poster was presented there, I got some feedback, and hopefully the first draft of the paper will become available on arxiv within weeks. 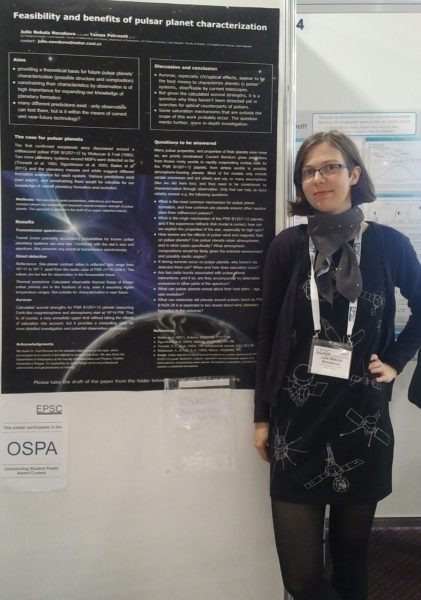 The next time I think “how hard can it be”, I’ll kick myself. It wasn’t easy, and I’m just hoping I didn’t make some blatant mistake a professional astronomer would never make. After all, I’m a biologist by study, though interested in planetary science for quite a time. By all means, I shouldn’t be trying to stick my nose into other fields, especially with questions that in the ideal case require someone who knows a bit about neutron stars and exoplanetary spectroscopy at least. Who could have known that neutron stars’ temperatures vary so vastly? Someone who knew more about them at the beginning. But the trouble is, no one like that actually produced any paper or conference presentation on the topic of pulsar planets’ direct characterization, as far as I know. After I delved into the search a bit, I resurfaced bearing great papers on formation scenarios – but the best way how to test these would be to know more about the planets than just their masses and orbits, and there was nothing about achieving that.

So I attempted to provide some very, very basic estimates as an amateur and I sincerely hope that someone more capable will be inspired and will produce a more rigorous work. The EPSC is a great means how to get the topic noticed and it’s frequented by professionals from a number of planetary science and astronomy-related fields, so there is a chance someone thought: “Wow, this is interesting – but it has to be done right!”

(And yes, I hope exactly that had happened.)

Not that this is wrong. I hope it isn’t! If it is, let me know ASAP as soon as the draft is out, and I’ll try to remedy it. But even if I avoided making a dumb-ass mistake, it’s still laden with assumptions that could be determined better, and it’s – I must repeat – very basic. No nice curves for the flux ratios, or simulated phase curves; just ugly tables with a few numbers. No more complex calculations that could be done. Let’s call the upcoming version a “green paper” for lack of better terms. I hope it won’t rest with that.

And why pulsar planets, you may ask? Am I not a biologist, who should be interested especially in planetary habitability? Though these planets certainly don’t seem like great targets for search for life, they are just extremely interesting. Theoretically, some planets could survive a supernova explosion, though none of the known ones seem to have come from this scenario based on their orbits and their host stars’ properties (millisecond pulsars were spun-up afterwards by accreting material from another star or a stellar merger – though some papers suggest it may be more complicated than that). Some might come from the supernova fallback, creating a disk around the newly born neutron star. Some might form in accretion disks or leftover merger material. Some may be remnants of stars themselves – very strange planets indeed. Some may be gravitationally captured. And that’s just a short summary… While a lot can be derived from the planets’ masses and orbits, knowing their composition – or at least temperature, albedo, size – would be awesome. That would also tell us much more about planetary formation and evolution in general – which is in turn needed for any search for life beyond our solar system. (But I’m mostly in for the pure awesomeness of pulsar planets. They are just so intriguing!)

Fun fact: It seems like pulsar planets are riding on the zeitgeist, since there was an interesting paper on pulsar planets’ potential habitability and atmospheric retention (Patruno and Kama 2017) uploaded to arxiv just about a month after I submitted my EPSC abstract. It’s nice, since they perform much different calculations with different aims – and unlike me, they are professionals who went into the details. So if you’re interested in whether the relativistic pulsar wind would erode any atmospheres or not, check it out. I’ll add a link here as soon as it’s online. Or just write me an e-mail and I’ll send you what I’ve got.

In the meantime, I can report that the Philippines were amazing, Riga was very nice, and the Azores seem wonderful too. The EGU/Galileo conference “Geosciences for understanding planetary habitability” started today and so far it was very interesting.