In an interview for XB-1 magazine, Adam-Troy Castro, a remarkable SF author known especially for his Andrea Cort detective SF stories, revealed what he’d been working at recently, what might happen should he ever try time travel, whether we can be looking forward to new stories from his popular Aisource Infection universe and more. Enjoy this snippet from the interview!

You’re a quite prolific author. How do you cope with time constraints that come along with it without time travel (assuming you don’t have a time machine hidden in your basement)?
Actually, I’m a prolific time-waster, when I’m not feeling it. You have absolutely no idea. But if you produce some directed work every day, the work accrues. I try for a thousand words every weekday and frequently beat that, sometimes by multiplying it. When a story is hot, I leave the thousand words far behind. I suspect that the rest of time is battery recharging.

Assuming you actually had a time machine hidden in your basement, would you visit your past selves like the protagonist of your story “My Wife Hates Time Travel” or would you rather try to avoid this?
Oh, boy, if I had a time machine, the advice I would give my younger self! But I’d never stop. I also perceive that sometimes the good things that happen in life occur only because the bad things steer you toward them. I suspect that if we could edit our lives we would not make them better, but homogenize them, removing the flavor.

In the Czech Republic, you’re well-known especially for your Andrea Cort novels. Are you planning to write more about her and from the AIsource Infection universe?
Yes, though I haven’t for a while, and none of the stories currently in the publication pipeline fit in that universe. At various points of completion on my hard drive are a new Andrea Cort novella and another starring the Porrinyards at a point in their lives before they met her. One of the problems I have with writing a new Andrea Cort story at this point is that it necessarily has to take place in her past, as the chronologically latest story, “Hiding Place”, brings her to a point where something has to change for her, one way or another, and I cannot address the issue except at novel length, and I cannot write the novel unless I know somebody’s willing to foot the bill for it. Stories set in her past, before EMISSARIES FROM THE DEAD, are fine, as happened with “With Unclean Hands,” but then the Porrinyards get left out, and I consider them an important part of the recipe for Andrea stories, as she can be pretty intolerable without their leavening influence. So, yeah, she needs novels. As for other stories in the AIsource Infection universe – they will be coming, though again, there are none in the publication pipeline right now.

Andrea’s experiences present a world where corporate slavery is a daily reality for most people, bullet-proof job contracts for decades ahead are common and human rights are a luxury on countless planets. Are you afraid that we might actually be going there?
Absolutely terrified of it. Already, the simple economic truth of life in most human societies is that if you’re not screamingly wealthy or otherwise somebody in power, you are a disposable spare part — and the simple truth of most empowered people is that the power is devoted to acquiring more.

You’ve written about zombies or vampires several times. How do you perceive recent changes of these phenomena and their popularity?
It amuses me that people argue at such length about changes in the “rules,” as if the rules weren’t always arbitrary. Generally, I roll my eyes at anything that paints vampires (and now zombies!) as sweet and attentive lovers; that’s necrophilia and therefore gross. There have been some recent innovations in both tropes, in print, that I find thrilling.

I’ve noticed that none of your bios online mentioned your work before you started your professional writing career, just that you studied Communication Arts at Cornell. I must admit it piqued my curiosity. What was your profession before you became a full-time writer?
I worked a customer service line for many, many years, and both it and a much shorter spell of one year in retail were so horrific that I keep talking about fictionalizing them, someday. Maybe. If I can stand to look.

Can you tell us what are you currently working at?
I am working on various novel proposals. The one I have the biggest hopes for, right now, is called LAWLESS, and is currently making the rounds; though I have something else in the pipeline, not yet ready for submission, that might or might not see the light of day. I offer only one teaser about that one, unreliable in that it might not reflect the intended product in the way you think it does: TRANSYLVANIA.

The full interview (in Czech) can be found at XB-1’s website. The print version was published in March issue of the magazine.
Next up some time later is Ken Liu! 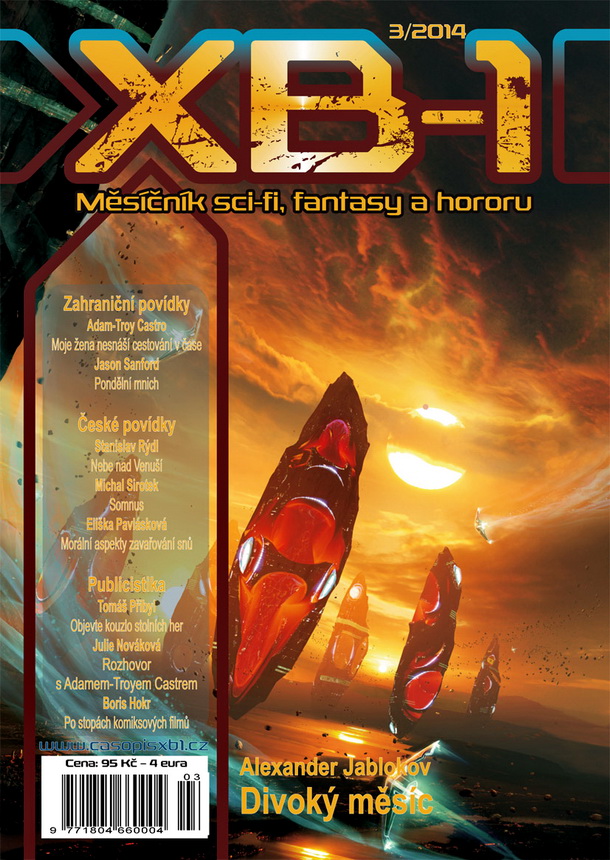