Doctor Meadows summed up the complexity of habitability very nicely. Too often – mostly in popular science texts, rarely in words of scientists working on the topic – we encounter a highly simplified notion of a habitable zone determined by the stellar flux and enveloped in sharp borders, where a planet either is or is not habitable. Many people don’t realize that this is far from the case. Habitable zone is a useful concept in assessing the probability that a given planet hosts liquid water on its surface and therefore may be habitable for life similar to ours. But even if we set aside possibilities such as distant or even rogue planets with dense hydrogen atmospheres, which could retain conditions optimal for liquid water, or life in the subsurface, habitability is a complex question.

Composition, size, mass and interior of the planet in question play a role we cannot neglect, as well as the planetary architecture (which can influence everything from the stability and eccentricity of the orbit to the early water delivery), stellar parameters, distance from the star, number of stars in the system, atmosphere (dependent largely on the planetary composition and stellar activity), tectonics (dependent on the interior…) etc. A terrestrial planet orbiting inside the habitable zone is not necessarily habitable and can turn out many different ways, which is something we unfortunately don’t see in most press releases informing of new HZ planets. Victoria Meadows and her colleagues had proposed a habitability index instead of the HZ (see the HITE – habitability index for transiting exoplanets – in Barnes et al., 2015). I’m not sure whether the approach provides more reliable estimates of likelihood than the HZ – it’s nice that it’s a continuum of values instead of a binary variable, but no one in clear mind takes HZ as strictly binary and we lack constraints on many values featuring in the index for many worlds. But I’ll need to read this paper and others carefully before pursuing this deeper.

Dr. Meadows mostly focused on HZ around M dwarfs in her talk. Habitability of worlds orbiting M dwarfs, the most common stars, is an interesting and complex question that has been tackled from various approaches for decades. The impact of the UV and proton flux from the star on a planet’s atmosphere has been studied in multiple works with varying results (more about that later, I hope). Another of the many intriguing topics surrounding this question is the role of tides.

Tidally locked planets, especially their interior convection dynamics and climate, have been modeled for quite a while. The role of tidal heating, well-known from some solar system bodies such as Io, is not as often brought up but could have several effects. To some extent, it could warm a planet which would otherwise be too cold to retain surface liquid water. It could also potentially play havoc with a planet’s magnetic field by influencing the interior convection. Last but not least, it could possibly heat a planet sufficiently to lead it to a Venus-like greenhouse state.

That possibility was explored by Barnes et al. (2013) who provide an exhaustive account of the related characteristics and also a nice appendix with the model. Though I don’t understand the models myself, I look forward to discussing them with my geophysicist colleagues who could hopefully point out new directions stemming from them.

The early atmosphere loss, possible O4 collisional features in the spectra and the notion that planets orbiting cooler stars could exhibit enhanced biosignature signs are also interesting, but I’d be summing up Dr. Meadows’ lecture if I were to venture into all topics she had mentioned. It was a great opening lecture for a conference where several of the talks and posters will be focused on M dwarfs and their impact on habitability, so I hope to provide a short account of news after the conference ends.

The other lecture by Dr. Köberl mostly summarized what we don’t know about the Late Heavy Bombardment. Hopefully more Moon geology missions would improve our knowledge. If I manage to catch him later for a word, I’ll ask about the possibility of dating impact record on icy bodies such as Ganymede or Callisto. Ganymede lander is still a long shot now and wouldn’t provide much data to this question, but in more distant future, data from more solar system objects such as the gas and ice giants’ moons could improve our understanding of the history of our system (and certainly not just in questions related to impacts).

I’ll be much more brief tomorrow, as there will be seventeen talks… Some articles other than these very quick blogposts will follow (likely mostly in Czech, though).

I’d love to give you some eye candy but I didn’t want to disturb the lectures by taking pictures. However, the conference has some nice and witty custom water bottles, which you can see below. 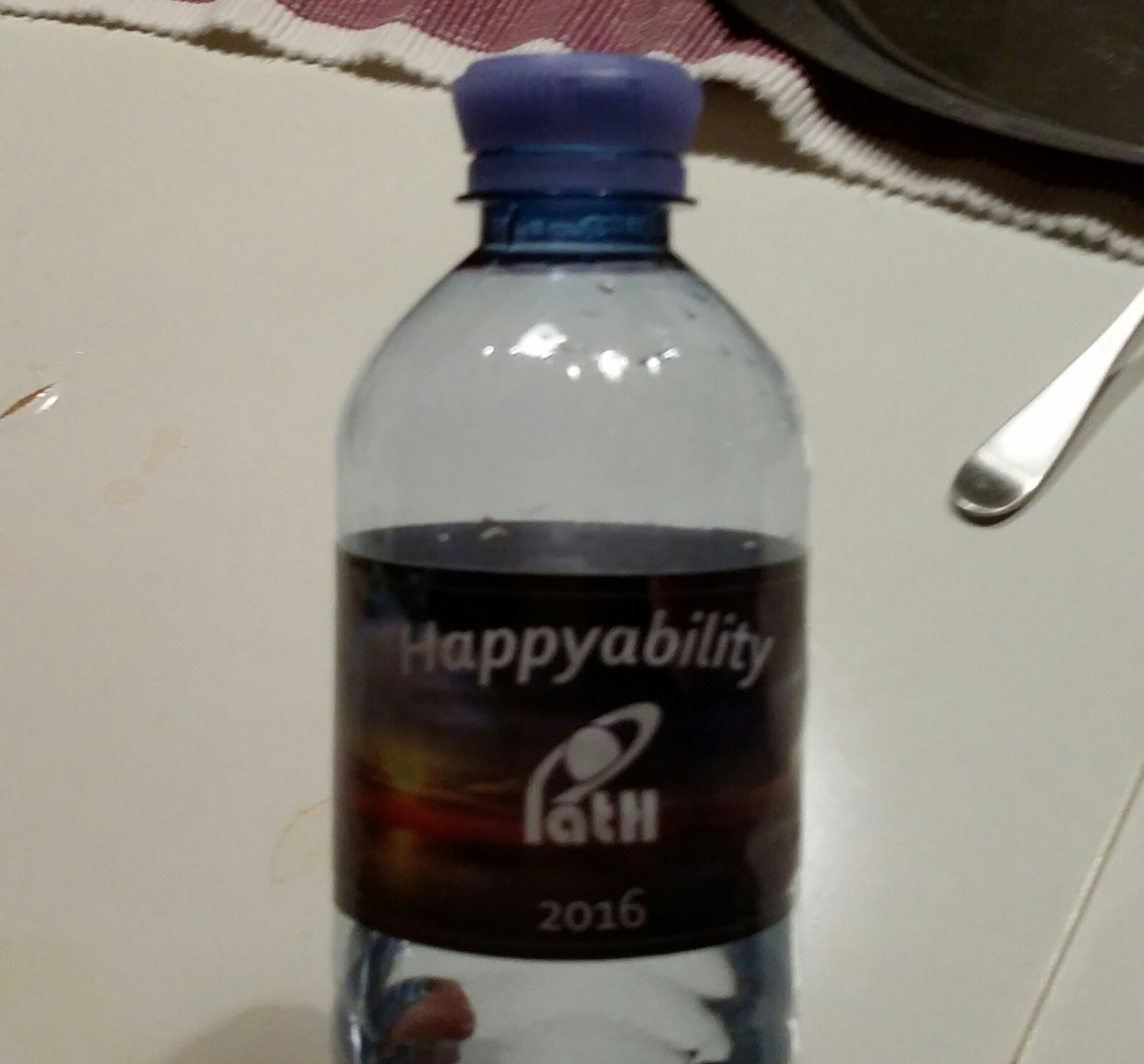 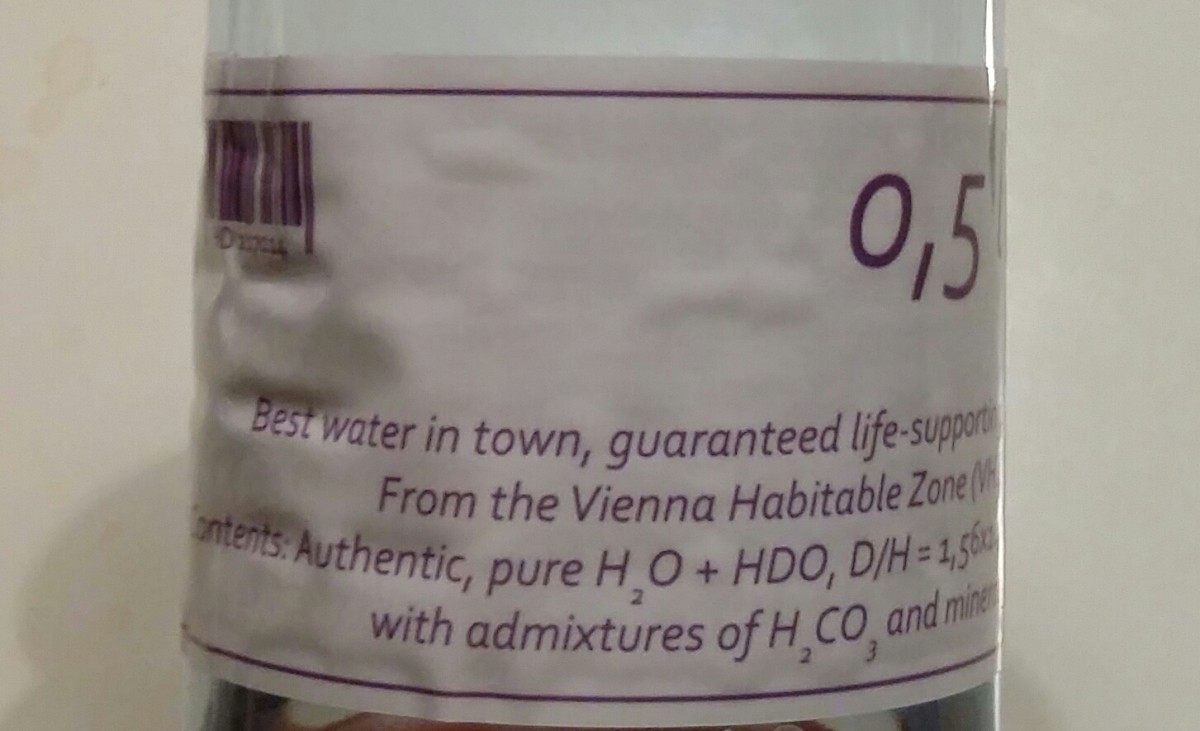 Looking forward to the rest of the conference! I also thank the Department of Geophysics of the Mathematical-Physical Faculty of the Charles University in Prague for enabling me and my colleague Tomas Petrasek to come here.