The first whole day of the Astrophysics of Planetary Habitability conference has been quite fruitful. The first session, The Host Star, was concerned mainly with the stellar environment of potentially planet-hosting stars. The talks especially explored the relationship between stellar age, rotation period, magnetic fields and activity. Several of them addressed the question whether M dwarfs could host habitable planets. The answer is by no means clear yet, as the question is very complex, our observational knowledge can constrain only some parameters and M dwarfs come in many flavors. Rotation rate, through the related intensity of the stellar wind, can have a big impact on whether a planet loses or retains its atmosphere. Slow rotators seem far more habitability-friendly – but what’s their actual abundance?

Stellar flares and coronal mass ejections are another potential problem for the atmosphere and any putative life on the planet’s surface. Modeling the effect of flares on the ozone layer has had mixed results so far. We haven’t observed any CMEs directly so far, but the radio observation Starburst Program, presented by Jackie Villadsen, could change that quite soon. Also, properties of the planet – particularly its magnetic field – are important in whether it keeps its atmosphere, how much stellar activity-related heating it undergoes and what radiation doses the surface receives.

We also talked to Jeffrey Linsky from the MUSCLES survey, providing complex stellar flux data for several M and K dwarfs based on the data from Hubble and Chandra. Using the coupled data enabled to reconstruct the flux across the spectrum, and Lyman alpha and EUV could be calculated. No UV inactive M dwarfs have been observed in the survey. The data may be instrumental in assessing the impact of M and K stars’ environment on planetary atmospheres.

The Planetary Formation session began with Yan Alibert, who reviewed planetary formation and habitability. Among other parts of the topic, he talked about the water content of planets, and stated that worlds with high-pressure ice at the bottom of the ocean would not be habitable due to the loss of the geochemical carbon cycle working on Earth. On ocean planets, no weathering would be depleting the atmosphere of CO2 and the CO2 released by volcanism would warm the planet and lead it into a moist greenhouse state (and acidify the ocean). However, that is presuming the convection in the HP ice – if present – would not enable sufficient removal of CO2. Weathering in deep sea vents does occur. And if conduction is not sufficient for releasing the planet’s inner heat, convection in HP ice should occur, although its frequency and intensity are difficult to estimate. Alibert also seems to have presumed rates of volcanism comparable to a planet whose rocky mantle is not covered with HP ice. Some models have already shown that it could inhibit volcanic activity. (And the degree of activity should be logically connected to heat release and therefore convection, which could provide some weathering… it’s certainly not as simple as Alibert had put it, although it’s hard not to simplify in the time frame of a conference presentation.) Later in the afternoon, Nader Haghighipour also pointed out that omitting collisions in a model of planetary development could lead to big overestimations of the usual water content. If included, impacts lead to water loss and produce far less water-rich worlds than Alibert’s model. Ocean planets may not be highly common after all.

Maria Lugaro had a fascinating talk about radioactive elements distribution in solar systems. Thorium seems to be more abundant in most solar analogs than the Sun. Why? It likely comes from neutron star mergers, rare events, so we can expect the distribution to be inhomogenous. The implications for more thorium-rich systems I can think of are thought-provoking: more long-lived radiogenic heating could lead to widening of the habitable region around a star, higher abundance and lifetime of subsurface oceans… For other elements and their izotopes, such as aluminum 26, we don’t know the distribution well. This much shorter-lived izotope has been abundant in the solar system and the related heating could possibly lead to more water loss in small building blocks of our system’s objects. The source increasing the solar system’s metallicity is not certain; it could have been a stellar death nearby and recently before the Sun’s formation, but possibly also self-pollution of the original giant molecular cloud.

Eduard Vorobyov had a very interesting lecture on planetary formation by disk fragmentation. A few dozens of planets (or likely brown dwarfs in some cases) several tens to thousands AU from their stars had been detected, but their origin is unclear. Were they scattered into those regions, captured by the star, or formed in situ? Vorobyov modeled gas clumps in the disk surrounding a young star. In his model (including just one forming star), clumps up to 100 Jupiter masses up to hundreds AU from the star formed, but most of them quickly migrated inwards and fell onto the star. However, especially in the later stage of clump formation during the star’s T Tauri phase, some clumps from about 3 to 43 Jupiter masses remained from 178 to 415 AU away from the star. The masses reproduce the observed ones very well, however, the range of semi-major axes is much broader in the observations. The model raises some interesting questions: If the clumps lose material during their inward migration, could their presence lead to smaller, even terrestrial, planet formation? Such a planet would probably accrete a primordial atmosphere (whether it would actually retain it depends mostly on its mass and distance from the star). Distant hydrogen greenhouse worlds, anyone? Also, in a few cases the fall had stopped in the model, but other migrating clumps would either push it onto the star or kick it outward. I wonder what orbits the potential resulting bodies might end up on.

To sum it up, today’s program has been interesting and raised many questions, some of which I hope to pursue further in some future popular science articles. Unfortunately, two lecturers did not arrive. Hans Zinnecker should have talked about the possibility of Earth-mass planets and life around metal-poor stars, Eric Gaidos about the ZEIT project. I was looking forward to meeting Gaidos; I wanted to ask some questions about degassed atmospheres vs. atmospheric collapse on young planets with low insolation, Tomas wanted to ask him about hydrogen atmosphere planets and their significance in astrobiology. Gaidos has contributed to papers on topics related to these, and many more.

Well, there’s e-mail. Even though it’s always more pleasant to just have a short chat during a coffee break.

And to give you some notion of how conferences are done Viennese-style, here’s a glimpse of yesterday’s reception on the university’s observatory, including a string quartet. 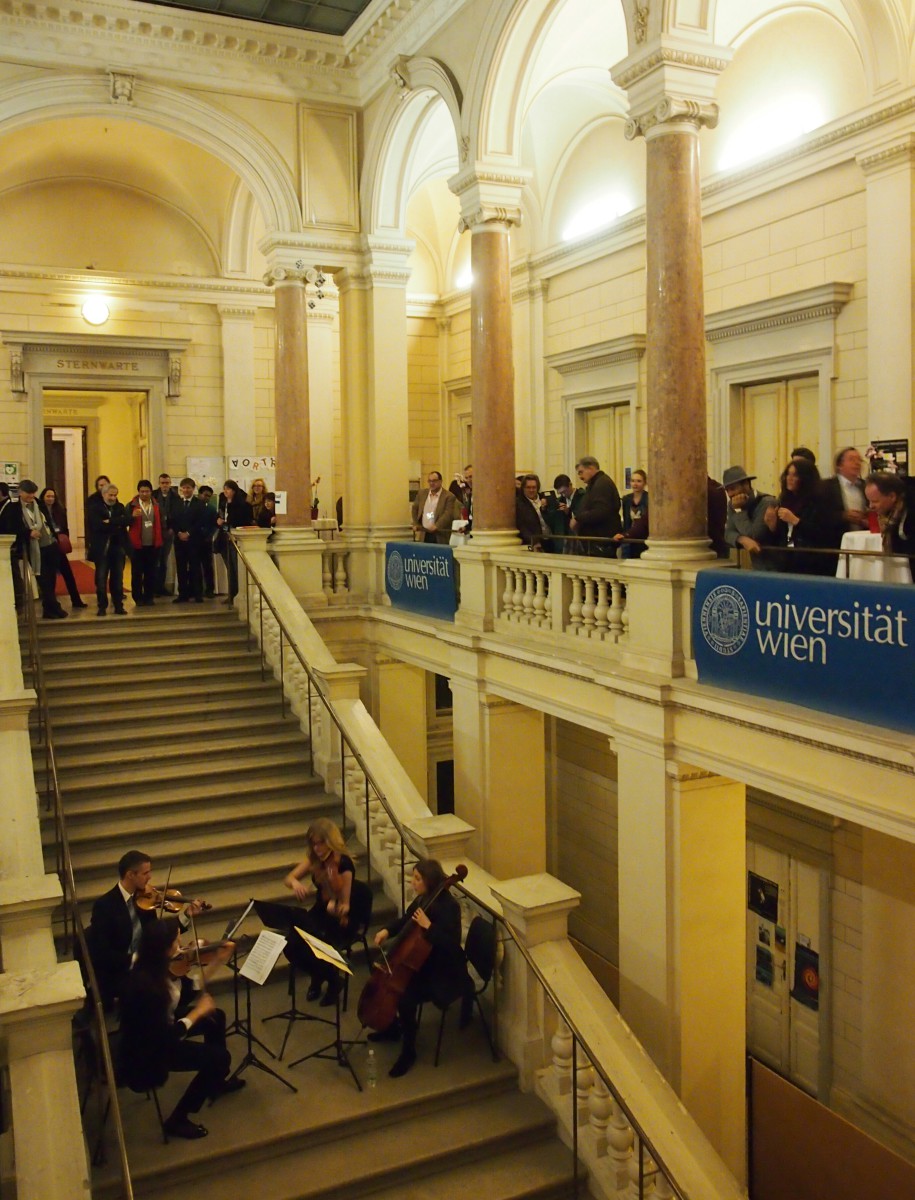 We thank the Department of Geophysics of the Mathematical-Physical Faculty of the Charles University in Prague for enabling us to attend the conference.