Principles of Habitability session opened today’s Astrophysics of Planetary Habitability. In the first talk, Ravi Kopparapu reviewed the concept of habitable zone, or rather surface liquid water zone, as he emphasized – it’s a very helpful concept for assessing the likelihood that a given planet may be habitable, but the actual habitability depends on many factors, as already stressed in previous talks. The number of HZ studies has rocketed up in the last three years, providing different estimates based on the used models and input parameters. Kopparapu himself favors the conservative HZ limits, which provide a useful framework for choosing targets for transmission spectroscopy and other methods. He was quite pessimistic about hydrogen greenhouse HZ extension – not that it wouldn’t work, but it would be extremely hard to detect more distant terrestrial planets and explore their properties.

However, I hope that they may be of interest, and framework for their exploration exists: Sara Seager et al. provide two excellent papers (both from 2013 in The Astrophysical Journal) related to the possibility of biosignature gases in H2 atmospheres of super-Earths (for the case of a Sun-like star and an M5V dwarf). Nevertheless, the semi-major axes of the planets considered in the detection model are still near the stars and the atmospheric pressure is 1 bar. Detecting and observing much more distant planets with thicker atmospheres would certainly remain difficult for some time.

Seager et al. (2013b) say: “Is there any hope that the next space telescope, JWST could be the first to provide evidence of biosignature gases? Yes, if–and only if–every single factor is in our favor. First, we need to discover a pool of transiting planets orbiting nearby (i.e., bright) M dwarf stars. Second, the planet atmosphere should preferably have an atmosphere rich in molecular hydrogen to increase the planetary atmosphere scale height. Third, the M dwarf star needs to be a UV-quiet M dwarf star with little EUV radiation. Fourth, the planet must have life that produces biosignature gases that are spectroscopically active.”

These articles are certainly worth reading, and especially 2013a is fascinating in exploring the possible biosignature gases and biomasses of putative life on planets with hydrogen-dominated atmospheres. I must admit I hope we detect a Haber World some day.

Two talks about binary system habitable zones were the highlights of today’s program. More than half the stars in our neighbourhood are multiple systems, so we need to understand the stability and habitability of their planets. We know from observational data that they can have planets around one component (S-type orbit) as well as around both stars in other cases (P-type). Siegfried Eggl from the University of Paris stressed the importance of orbital evolution on habitability, because if it’s accounted for, the permanent HZ shrinks to barely half the usual estimates without this parameter. However, the extended and average HZ still remain quite large. It seems a nice framework for estimating the likelihood of habitable planets in binary systems.

Manfred Cuntz of the University of Texas, Arlington, presented a new approach to habitability of binary systems. His model did not assume an S-type or P-type HZ up front – its results showed that. Nearly circular orbits and high luminosities seem favorable for both, the resulting type of course depends on the separation. In the follow-up work, he’d also like to explore HZs for different solvents than water. It seems a demanding work; some proposed alternative solvents, such as formamide and hydrazine, would need basically water-free environments, which makes me very skeptical about their existence as solvents for life. However, this isn’t a problem for solvents liquid under different conditions or forming a solution with water. Climate models assuming the abundance of different solvents would also be interesting, but that is a completely different future work someone will hopefully try to do.

There was also a highly interesting poster by Mason et al., taking into account the rotational evolution of the binary system and its effect on habitability. Under some range of separation of the components, the tidal effects dampen the stars’ rotation rates and thus decrease the XUV and stellar winds, making the surrounding environment more friendly to planetary atmosphere and possibly life. It works for similar-mass as well as different-mass components. They have a calculator at bhmcalc.net.

Feng Tian from the University of Beijing began the Planetary Atmospheres session with his great review of processes in work in the evolution of atmospheres. He discussed many factors influencing it, both from the host star and the planet itself, and one of his final remarks really hit the spot: “We’ve talked about liquid water habitable zones, but maybe it’s time to talk about more kinds of habitable zones.” The UV environment, stellar winds and activity… all could produce its kind of HZ, although the definitions would not be as nice and simple as the surface liquid water HZ. Special HZs may be a hyperbole, but after finding a planet in the classical HZ, these are the factors we certainly cannot neglect.

A potentially very important lecture was delivered by Andrew Lincowski who researched the effects of CO2 clouds on the planetary climate and found that current outer HZ limits, based on CO2-derived warming even with CO2 clouds, may be too optimistic.

Giada Arnay talked about “pale orange dots”, late archean Earth analogs with prominent organic hazes. Around stars with too high UV flux, hazes would likely not form because of the oxygen radicals from photolysis in the upper atmosphere, but otherwise, with the CH4/CO2 ratio above approx. 0.1, hazes seem likely and could serve as biomarkers for worlds with Earth-like CO2 levels, because abiotic methane would not be sufficient for haze formation – life would need to produce it. Organic haze would also act as an UV shield – by far not as efficient as ozone layer, but nevertheless very helpful for the prospects of surface life.

That wraps up today’s highlights. Although all the talks were interesting, it would be impossible to mention all of them. I’m coming down with a cold and in addition, there is the conference dinner tomorrow, so I may clump days four and five together and post another mini-summary on Friday. We shall see.

I’m also curious how many times we’ll see the HZ diagram by Chester Harman (below). It has been shown five times so far. I’m counting. 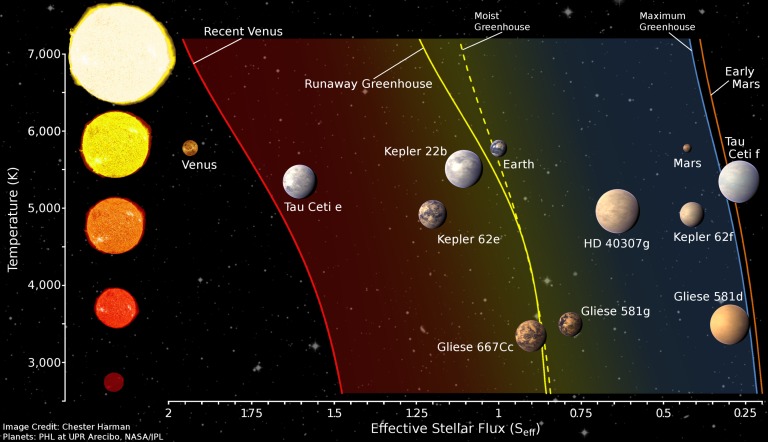 Many thanks to the Department of Geophysics (Charles University) which enabled me and my colleague Tomas to attend the conference!