The Astrophysics of Planetary Habitability has ended yesterday, and during its 5-day run, it has brought forward many interesting questions along with approches to find their answers. Can M dwarfs host Earth-like habitable planets? How severely do various stellar properties impact the prospects of habitability? How do orbital dynamics in different kinds of system constrain what worlds could stably exist there? What role do radioisotope abundances play in the evolution of potentially habitable planetary environments? What processes shape planetary atmospheres and how do they interact? How does interior structure of a planet influence its habitability? Although we don’t and perhaps for a very long time won’t know exact answers to most of them, research presented here can at least point us to some directions to explore observationally when we can, give us some notions about what to expect, and provide testable hypotheses that will help us assess which models approximate the reality better and how do they connect to other measured evidence.

The fourth day of the conference hosted two main topics: interiors of planets, and search for exoplanets. The former started with an invited talk by Paul Tackley, who spoke about long-term evolution of planetary interiors and factors that can affect it, such as large impacts, viscosity of the mantle, internal heating or water content. His simulations resulted in plate tectonics on super-Earths equally or more likely than on Earth-mass planets. That is a very interesting result and a compelling one when considering the habitability of super-Earths. However, the model assumed apriori differentiation into core and mantle and then just calculated with the mantle. But would super-Earths undergo differentiation comparably to Earth-like planets? When I asked him during the coffee break, Dr. Tackley said that most likely yes, as differentiation would go quickly enough in the molten material. Sufficiently large impacts may induce enough melting. Zeng and Sasselov (2013) previously argued that differantiation would depend on the redox state and not all terrestrial-composition planets may undergo it. I had also seen David Stevenson’s lecture about how super-Earths may not be Earth-like (https://m.youtube.com/watch?v=e8ieGwpWeRg). It’s an interesting topic and one of which we’ll hopefully know more with more models such as these and most importantly much more precise measurements in the future.

Lena Noack, whose previous work I had seen at last year’s EPSC, set to answer the question whether terrestrial planets ranging from Mars-sized to super-Earths can outgas enough CO2 to be able to support liquid water at the outer edge of the classically defined HZ. She estimated the mantle depletion by partial melting of the mantle, and found that bigger radii and also relatively larger cores than Earth’s would lead to lower outgassing rates. Earth-sized or slightly smaller planets with a bit smaller cores may outgas their CO2 more efficiently. Plate tectonics, if present, also help outgassing a lot.

Constraining planetary composition from existing crude measurements was the topic of Caroline Dorn’s talk. She used observational evidence of Fe/Si and Mg/Si ratios of the host stars to estimate the relative sizes of core and mantle for planets whose size and mass had been measured. Although all of the used values have huge uncertainties at this time, it’s a very promising and potentially highly useful work for future study of exoplanets. Dorn’s and Noack’s talks also had somewhat pessimistic conclusions about the habitability of currently known planets – both concluded that known HZ-located planets seem unlikely to host conditions similar to Earth’s. If they’re right – and both studies seemed very thorough, although laden with similar limitations as all of them – our search is still to yield the results some people wish to see so badly. They certainly provide useful tools how to conservatively estimate a planet’s habitability.

The latter topic, search for extrasolar planets, was summed up very nicely in two invited talks, one by Heike Rauer about space-based telescopes and the other by Stephane Udry about Earth-based search. Telescopes such as CHEOPS, TESS or PLATO should provide us with far more (quantitatively as well as with respect to completeness and precision) measurements in the near future, and Earth-based projects such as HARPS, ESPRESSO, CARMENES or MEarth cannot be neglected. All of them have or will have an important place in the search for exoplanets. We missed the talk by Eike Günther about the Graz-Tautenburger-Imager (GTI), as we went to visit Ruth-Sophie Taubner’s workplace in a different part of the University of Vienna. She cultivates methanogens under different gas and nutrient mixtures resembling those we could possibly find on Enceladus. She had a great poster here at the Astrophysics of Planetary Habitability, as well as last year’s EPSC. I’m very much looking forward to the papers that are going to stem from this research. Last year, Ruth-Sophie also had a review about ecophysiology of methanogens with respect to astrobiology in the Life journal. The whole ExoLife project group at the University of Vienna seems very promising.

The final day of the conference was focused on orbital dynamics and their role in habitability. The role of Kozai-Lidov mechanism, scattering (especially by different number, orbital properties and mass distribution of giant planets in a system), dynamical stability, use of dynamical simulations to constrain the possible presence of other massive planets in currently known systems and the possibility of eccentric planets with life-supporting climates were discussed by the speakers.

The whole conference tied the diverse topics – host stars, planet formation, HZ concept, atmospheres, planetary interiors, search for exoplanets, and architecture and dynamics of planetary systems – together very nicely and made it apparent that none of these variables are totally independent of the other ones and scientist studying them with respect to habitability should speak to their colleagues from different habitability-related fields.

The Astrophysics of Planetary Habitability was a great conference full of interesting talks and posters. I want to thank the organizers for making it happen, and I hope that there will be another similarly-focused conference in 2018, as they had mentioned this possibility yesterday. As to discussions during coffee breaks, the “mixing ratio of people” seemed lower to me than on EPSC, but it was always possible to find the people I wanted to ask something, and we’ve also met many new interesting people during the breaks and social events. And I also thank the Department of Geophysics (MFF UK) for enabling me and my colleague to come here. The conference was certainly worth it and I’m looking forward to seeing advances in the research presented here! 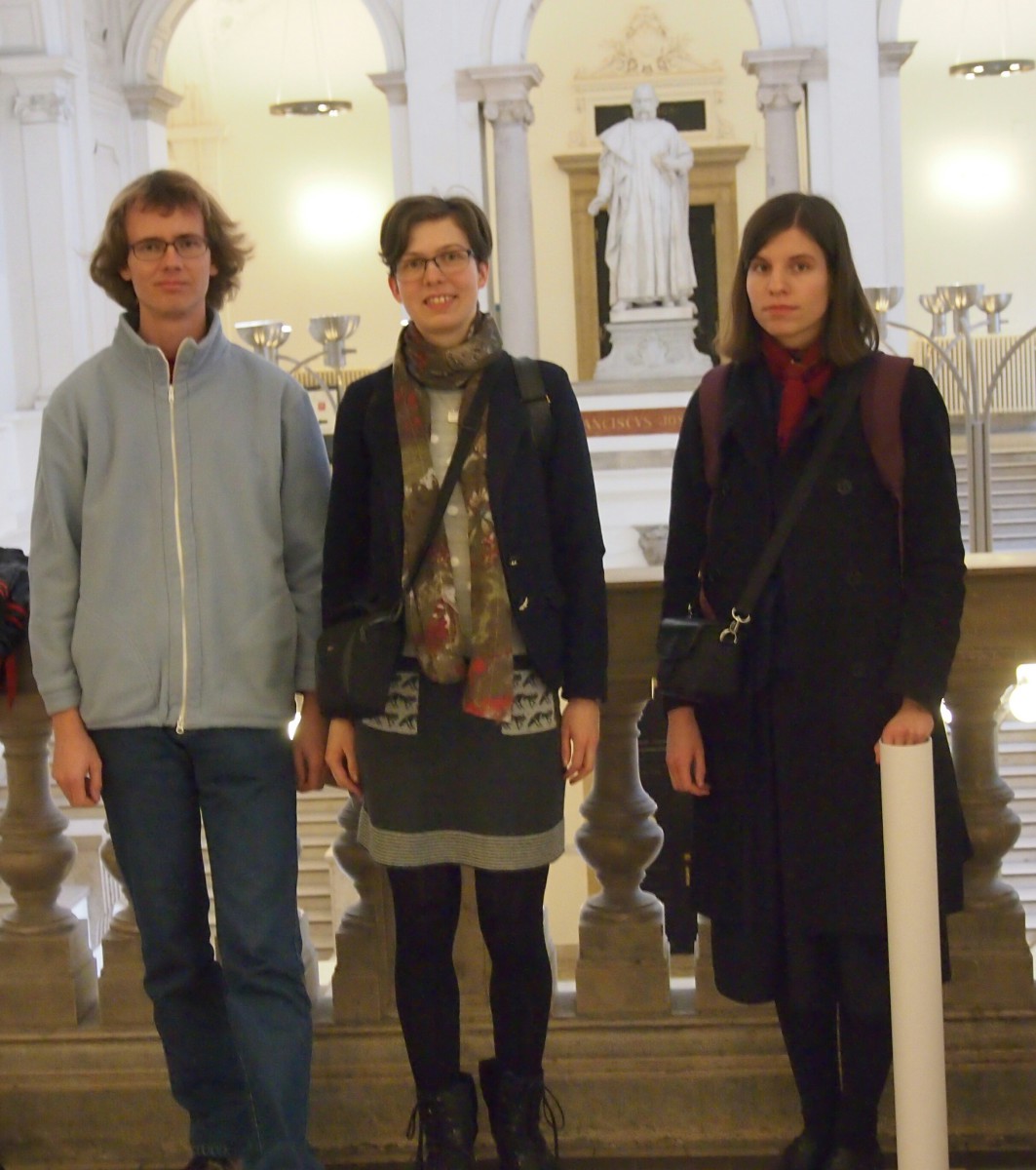 Tomas Petrasek, I and Michaela Kanova from the Department of Geophysics, standing above the stairs leading to the conference room. Photo taken by Dr. Jeff Linsky.