I’m bringing you another snippet from interviews I do for XB-1, this time with a notable Czech SF editor Martin Šust.

Martin Šust is well-known as the editor of foreign lit section of XB-1 magazine, XB-1 website, several Czech publishing houses, particularly Laser-books, and formerly the Czech edition of F&SF. He has edited mainly new weird anthologies Trochu divné kusy (Rather Weird Pieces) 1 – 3 and an anthology of new space opera Plameny hvězd (The Stellar Flames). He’s also the author of Slovník angloamerických autorů fantastiky (The List of Anglo-American SF authors) and specializes in introducing exciting foreign SF on the Czech market. His newest contribution is a retrofuturistic anthology Plnou parou (Full Spead Ahead). In this snippet I had chosen from the interview, he talked about his views about Anglo-American as well as Czech fiction and the future of speculative fiction.

How did your work on anthologies change since you had assembled the first Rather Weird Pieces anthology? After all, not many online magazines were on the market then, while today a lot of stories are freely available and most have at least a snippet on the internet…

Online publishing made the work somewhat easier, of course, but not very much. For example, only three from the twelve stories in Full Steam Ahead were published in online magazines and one solely on Amazon, most of them came from various anthologies – so I still needed to contact the authors and ask them if they could send me their text. On the other hand, more and more stories are getting published nowadays thanks to the online market, so orientation on the market and the final decisions became rather harder. Luckily, I have a lot of contacts and experience thanks to working for XB-1, formerly Ikarie, which comes as a great advantage.

Do you have any exemplar or inspiration among foreign editors?

I used to look up especially to Gardner Dozois, today I most of all respect Jonathan Strahan for his diligence and brilliant yearlong activity not just on his The Best Science Fiction and Fantasy of the Year but a number of other original projects too. His taste in fiction seems to me quite similar to mine, though it’s not easy to tell since editors also try to meet the taste of their readers and offer them diversity where every reader can find his beloved piece. That’s what I’m trying to accomplish every month in XB-1 as well as in my anthologies. We all still have lots to learn and it’s best to learn from the best.

Anglo-American speculative fiction went through a number of changes since the beginning of this century: more online publication options, new popular subgenres, authors from all over the world writing in English… What changes do you consider most important or interesting and where do you see SF in this decade going?

Everything is connected to the growth of electronic publishing and erasing boundaries and distances. English is so widespread nowadays that almost everyone regardless of their nationality can learn it since childhood. And thanks to new opportunities and expanding the market, there is more space for non-Anglo-American writers including Czech authors. Personally, I consider this trend very positive and expect it to continue and intensify in the future. These days, Anglo-American authors still have a major role but it might not take long for writers from the whole world to fill the gap. I believe that non-Anglo-American online magazines will play a more important role in the future and the market would expand and diversify even more. It’s a fascinating unstoppable process favorable especially for the readers – they’ll just need to learn to voluntarily pay for what they like, or it would inevitably lead to more commercialization and depreciation of the written word.

What’s your opinion about current Czech SF – and would you try to predict where it might be going?

Czech SF seemed a little boring to be for a long time, shut out in its own self-praise and attempts to copy successful trends. Until recently, I’ve rather avoided it, though a lot of projects interested me. Nowadays I’m finding a way back to it since lots of new plans occur and everything’s starting to move ahead again. I welcome attempts to get into foreign markets, even if just by one story, and I hope there will be more. I also welcome ambitious projects attempting to achieve worldly goals. I don’t like the frequent Czech self-centeredness and trying to astonish outwardly, while if you look closer, you find an inflated bubble of nothing. It may sound too harsh from me but most of all I’m excited to see signs of change and the will to change around me. A crisis was bound to happen, the so-called “Golden Age” is past us and everyone needs to work harder now. I hope that XB-1 finds its place in this process and won’t just stand by.

You can find more of the interview (in Czech) on XB-1 website: http://www.casopisxb1.cz/aktuality/pribehy-se-vali-na-ctenare-tempem-parniho-rychlovlaku/

Don’t be surprised if you find some of the questions above not present in the linked Czech article; that one is a snippet too, the full interview is available in the January issue of XB-1 (see the cover below). 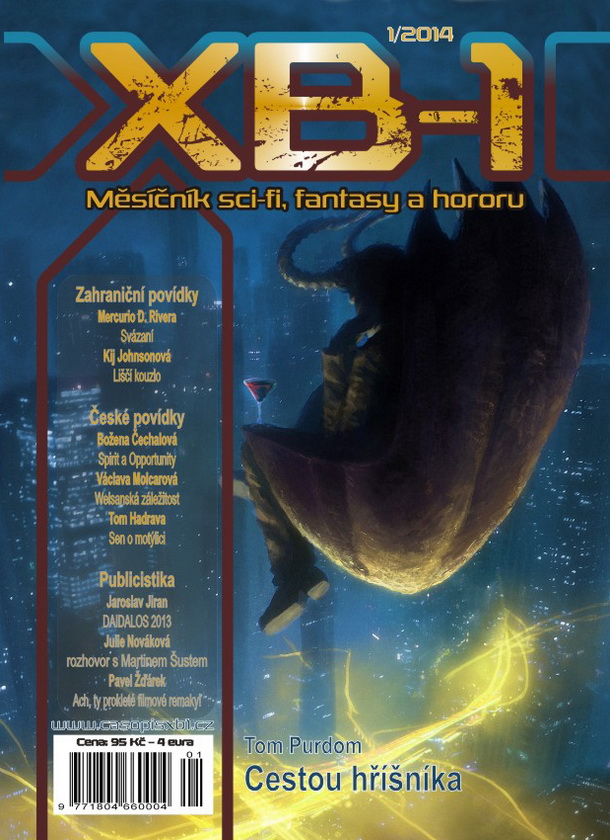