That time of skeletons creeping down chimneys and eldritch carols has passed, and the time of reflecting upon the closing calendar year is here in its full strength. It’s also the time we think of our wishes and resolutions for the coming year. Overall, 2016 has been strange. If there is such a thing as split personality for years, 2016 is a prime example. We’ve seen extremists from various sides of political spectra and social media-abusing demagogues triumph, while many thousands of people in danger massively flee their homes. Some warn that the foundations of democratic societies are crumbling, and it somehow feels like we’re just before one of the timelines in William Gibson’s The Peripheral (oh yes, Gibson has got an uncanny knack at noticing things already present in the world years ahead of others). We should not take it lightly or dismiss it as exaggerations.

And yet, it was also the year that most likely continued the good trends of the preceding decades: decreasing both relative and absolute number of people living in extreme poverty in the relevant documented history, conquering even more diseases, spreading literacy, higher perceived happiness – all in all, if there’s no unexpected big jump in the data (for more on the poverty trend and pros/cons of the methodology e.g. here), it was on average a very good year, it’s just that this average is shadowed by many horrid events and also more subtle changes like the income gap widening in many areas: not to be taken lightly, perceived as normal or forgotten. But also not to be a cause for shouting “apocalypse”, panicking and doing nothing useful. They’re serious and need our work and attention. We can work on continuing that trend of the world getting on average better in terms of reducing poverty, providing access to medical care, education, and more. All of us can contribute to that, and every baby step counts.

In the realm of speculative fiction, it was a very good year. Lots of exciting new novels and shorter works on my to-read list! For me personally, it was a wonderful year. Lots of my stories and my translations of other authors’ stories had been accepted, I edited Dreams From Beyond (reviewed here by Rachel Cordasco), and several of my stories were published this year. Um, the award nomination season is approaching, right? This is new to me and I’m just becoming to understand it as a stranger to the Anglophone market for most of my life, so any advice how it’s done? Or I could just list my eligible stories (aside from the anthology) below, yes?

If you have read and loved any of them, please consider them. If you haven’t, don’t. Seriously. Never nominate something you haven’t even read, no matter who else recommends it. Read it first, decide then.

In terms of getting to know other people, places or things, 2016 has been superb. I attended The Astrophysics of Planetary Habitability conference, which was just astounding and full of inspiration for science, popular science articles and science fiction alike. Academia Film Olomouc was as great as the year before. I got to the national FameLab finale and received one of the awards. I toured Norway all the way from Oslo to Lofoten with my husband, and when we got lost on Moskenesoy, we’ve met a great hiking books writer Harri Ahonen by asking him for the directions. During the two science-themed summer camps I worked on, I got to impersonate a saber-toothed cat, teach kids how a skeleton fits together, and find several open as well as globular clusters with a telescope on my own (while interested in astronomy for as long as I can remember, I’m a lousy sky observer!). On the Festival Fantazie in Chotěboř, I won the Aeronautilus Award for the best novel and also the best short story published in 2015.

I had the honor to be among the students selected by ESA for a sponsorship to attend the International Astronautical Congress, held in Guadalajara in late September. It was an absolutely wonderful experience, made even greater by the ISEB (International Space Education Board) events. I loved it and gained some useful insight into my educational and perhaps also scientific activities. Not speaking of the beauty of Mexico we at least briefly glimpsed, and then touring Netherlands on my own and spending time in the Rijksmuseum, wandering through Haarlem and getting my hair blown into my face by gusts of wind next to the famous windmills. And then there was Eurocon in Barcelona: absolutely brilliant! I’ve met so many wonderful people on the convention, seen lots of interesting program and got to see the beautiful Barcelona. 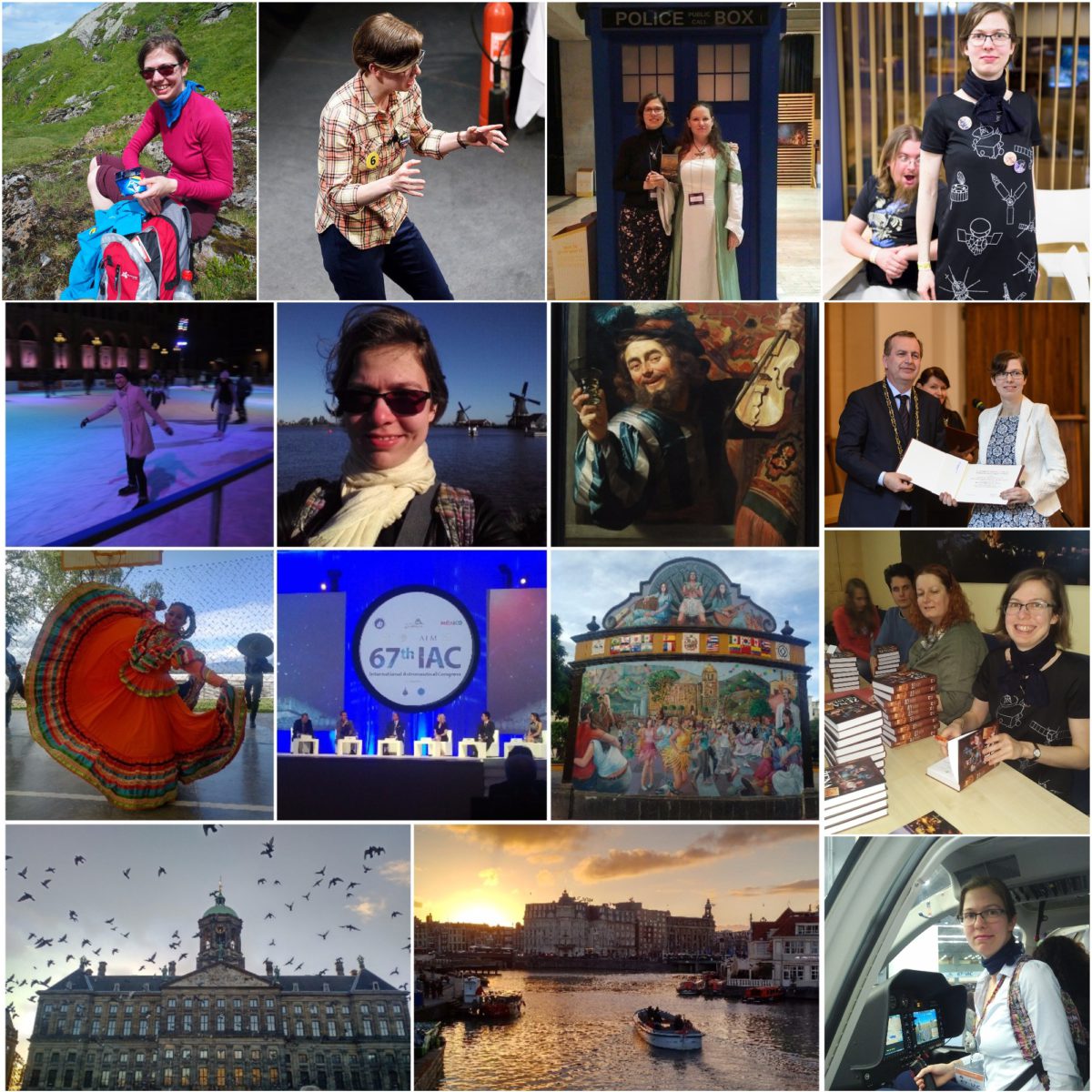 Back from me to the bigger picture. In science, 2016 was a great year. Gravitational waves. New confirmed exoplanets. Hypothetical Planet Nine. More dwarf planet and smaller objects discoveries in the Kuiper and beyond. The successful finale of the Rosetta mission. Juno’s arrival to Jupiter. Year in Space and the Twin Study. Lots of bold announcements concerning especially piloted space exploration. GAIA data release. Genes transcribed post-mortem. Wider uses of CRISPR. Eukaryote which lost its mitochondria completely. Peculiar silica deposits on Mars. Thinner crust of Enceladus than expected. Possibly more subsurface oceans than we had expected (not just you, Pluto – what about Dione?). Maybe very young Saturnian inner moons. And much, much more, some of which we’ll perhaps only appreaciate some years in the future.

I’m looking forward to lots of expected events in 2017. The final part of the Cassini-Huygens mission. New rocket launches. Continuing search for Planet Nine, and hopefully more Kuiper Belt/scattered disk/inner Oort cloud objects. And I have a special list of somewhat specific wishes for 2017…

All the best into the new year!